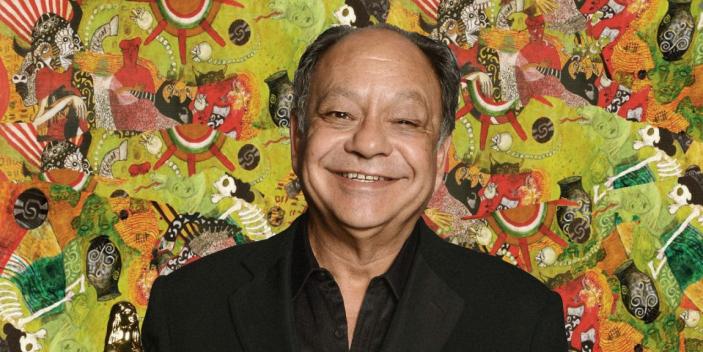 Tulsa, Okla. (May 24, 2017)— From the Techno and House dance parties of the backyards and warehouses of East Los Angeles to the border refugia of El Paso to the ancient storytelling strong enough to survive the Rio Grande crossings, Chicano thrives on community.

“In ways both big and small,” said Philbrook curator Sienna Brown, “our communities define our experiences and ourselves.”

In Papel Chicano Dos: Works on Paper from the Collection of Cheech Marin, Philbrook Museum of Art presents works by 26 artists, assembled exclusively from the Chicano art collection of actor-comedian Cheech Marin. While the pieces are linked by the common theme of community, they illuminate the diversity of the Chicano experience through unique artistic practices and viewpoints. The exhibition opens June 4 at Philbrook Museum of Art, 2727 S. Rockford Road, in Tulsa.

Marin, who with Tommy Chong formed the legendary 1970s comedy duo Cheech & Chong, is among the foremost collectors of Chicano art in the world. Chicano (or the female Chicana) is a term used to define a person of Mexican-American ancestry, typically of Southwest descent. But Chicano is also a cultural, ethnic and community identity.

“Mexican Americans, for the most part, are indigenous to this continent and have various Indian bloodlines and Spanish ancestry,” said CiCi Segura González, whose painting “Soy Chicana” (“I’m Chicana”) is among the works exhibited in Papel Chicano Dos. “My artwork portrays the blending of our roots.”

The drawings, prints, and paintings on paper represent a wide range of emerging and established artists from the 1980s to present day and feature images influenced by pre-Hispanic symbols, post-revolutionary nationalistic Mexican motifs, and contemporary urban culture. The images explode with color, and celebrate the richness of Chicano life, and the mystical side where life seeps over into death.

Many artists in the exhibition present social issues concerning labor, political liberation, and spirituality in ways that combine the images iconic to Chicano art with those from a wider range of historical sources. These visuals combine to create a multifaceted view of Chicano communities and shed light on the issues and triumphs facing all American communities.

In conjunction with the exhibition, Philbrook will host “An Evening with Cheech Marin,” 6 p.m. June 22, in the Patti Johnson Wilson Hall at Philbrook. Marin will discuss his collection, his career as a Chicano actor, director, comedian, author and musician, sign hardcover copies of his new memoir, Cheech Is Not My Real Name: … But Don’t Call Me Chong. Tickets are $30-$35, available online at my.philbrook.org.

About Philbrook:
Rooted in the beauty and architecture of an historic home gifted by the Phillips family in 1938, Philbrook Museum of Art has grown to become one of the preeminent art museums across the central United States. Highlights of the Museum’s permanent collection include Renaissance and Baroque paintings from the Kress Foundation, one of the greatest surveys of Native American art anywhere, American and Southwestern art, photography, and growing modern and contemporary collections. The Philbrook main campus spans 25 acres of grounds and formal gardens, and features an historic home, as well as a modern museum complex. The satellite location in downtown Tulsa showcases the Philbrook modern, contemporary, and Native American art collections, as well as the Eugene B. Adkins Collection and Study Center of Native American art.